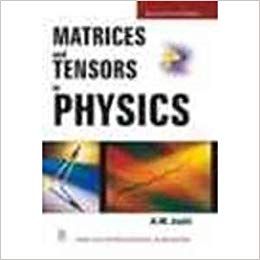 Matrices and Tensors in Physics

The first part of this book begins with an introduction to matrices through linear transformations on vector spaces, followed by a discussion on the algebra of matrices, special matrices, linear equations, the eigenvalue problem, bilinear and quadratic forms, Kronecker sum and product of matrices. Other matrices which occur in physics, such as the rotation matrix, Pauli spin matrices and Dirac matrices, are then presented. A brief account of infinite matrices from the point of view of matrix formulation of quantum mechanics is also included. The emphasis in this part is on linear dependence and independence of vectors and matrices, linear combinations, independent parameters of various special matrices and such other concepts as help the student in obtaining a linear understanding of the subject. A simplified proof of the theorem that a common set of eigenvectors can be found for two commuting matrices is given. The second part deals with Cartesian and general tensors. Many physical situations are discussed which require the use of second and higher rank tensors, such as effective mass tensor, moment of inertia tensor, stress, strain and elastic constants, piezoelectric strain coefficient tensor, etc. Einstein's summation convention is explained in detail and common errors arising in its use are pointed out. Rules for checking the correctness of tensor equations are given. This is followed by four-vectors in special relativity and covariant formulation of electrodynamics. This part comes to an end with the concept of parallel displacement of vectors in Riemannian space and covariant derivative of tensors, leading to the curvature tensors and its properties. Appendix I has expanded and two new appendices have been added in this edition.