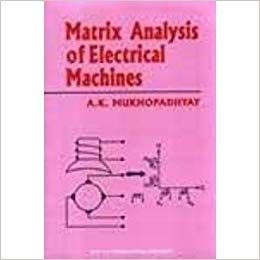 Electrical machines may be analysed utilising one of the three methods viz. Classical theory, Unified theory and the Generalised theory of electrical machines. Generalised theory may also be regarded as the matrix theory of electrical machines which requires only a knowledge of the circuit equation, elementary matrix algebra and the principle that the power of the system must remain invariant irrespective of the terms in which it is expressed. This technique is the best approach to obtain electrical machine performance for both the non-specialist and the specialist and that the latter will find in it, a powerful tool when he is faced with more complicated performance problems. An attempt has been made in this volume to study most of the electrical machines normally covered in undergraduate and postgraduate courses utilising matrix analysis. The book also includes some more advanced problems to indicate the power and limitation of the method. After an introduction to the theory, the same methodology has been applied to static circuits as illustrations. Then the Generalised machines of first and second kinds have been introduced and analysed followed by the different case studies. Both steady state and transient analysis of conventional machines have been presented in both static and rotating reference frames. The beauty of the matrix theory has been projected while developing the equivalent circuits of different machines using revolving field theory where physical concepts have been derived from the mathematical models developed through matrix analysis. The latest development of the theory viz. The development of state model of different electrical machines has been explained clearly in the text. These models may readily be utilised for stability analysis using computers. The book has been presented in such a way that, it will be a textbook for undergraduate and postgraduate students and also a reference book for the research students in the relevant area and practising engineers. The treatment of the book may find wide application for the practising engineers who face day-to-day problems in the practical field since the theory is based on elementary knowledge of matrix algebra and circuit theory rather than complicated physical laws and hypothesis.