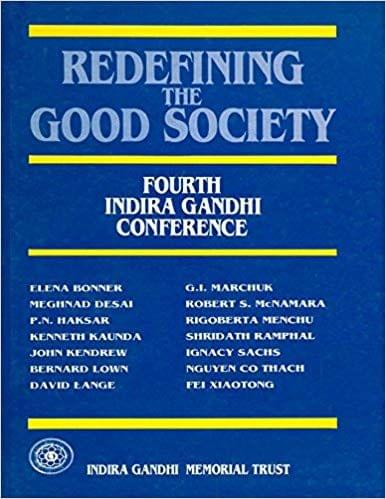 The last decade of our century mocks the earlier ones. The certainties of ideologies have exploded. Empires have broken up. But nation-states are also undergoing fragmentation. Science and technology have grown. While bringing extraordinary prosperity to the rich nations, they have widened the gulf with the poor. Hunger and disease plague the planet and now there are new threats dangerous depletion of non-renewable resources and of biodiversity. Enlightenment has not spread. More hatred is preached in the name of religion. With more communications there is less understanding. In rich nations as well as poor ones, the individual feels more insecure. Any group, any person, has access to fearsome means of mass destruction. The great need seems to be to recreate a sense of belonging not only to mankind as a whole but to a specific, caring society. An attempt of REDEFINING the GOOD SOCIETY is the task of the Fourth Indira Gandhi Conference, which was held in New Delhi from 19 to 23 November 1993, by the Indira Gandhi Memorial Trust, of which Shrimati Sonia Gandhi is the Chairperson. The Indira Gandhi Conferences are held once in two years as a tribute to a person who cared deeply not only for her own people but for all people.1987: Towards New Beginnings1989: The Making of an Earth Citizen1991: hallenges of the Twenty-First Century They were attended by celebrated thinkers who included statespersons. scientists and writers. I have never felt less like dying and that calm and peace of mind is what prompts me to write what is in the nature of a will. If I die a violent death as some fear and a few are plotting, I know the violence will be in the thought and the action of the assassin, not in my dying for no hate is dark enough to overshadow the extent of my love for my people and my country, no force is strong enough to divert me from my purpose and my endeavour to take this country forward. A poet has written of his 'love' ``how can I feel humble with the wealth of you beside me!`` I can say the same of India. I cannot understand how anyone can be an Indian and not be proud the richness and infinite variety of our composite heritage, the magnificence of the people's spirit, equal to any disaster or burden, firm in their faith, gay spontaneously even in poverty and hardship. Indira Gandhi